With the refugee crisis ongoing, three refugee projects in Vienna were part of Austria's 'Places for People' submission to the Venice architecture biennial being held in 2016. Three teams were commissioned to work closely with NGOs, planning and mentoring the adaptation of facilities for the accommodation of refugees.

One of the three projects was in progress at the 'Haus Erdberg' centre – a basic services facility in Vienna which housed more than 600 asylum seekers. In the framework of a 'Social Furniture' project about 4000 m2 of Doka panels were being turned into items of furniture for everyday use. The furniture was assembled by architects from the EOOS design studio and refugees eager to help in a workshop that was set up directly inside the centre. In that way residents of the Caritas refugee accommodation not only got essential furniture for their daily life but also a task and perspective. At the same time, the goal was to arouse the interest of young people for handicraft and other professions.

Another important part of the project was a catalogue with instructions on building the furniture, so as to promote self-organisation on the part of the residents. A model project that will have a sustained effect long after this year's architecture biennial has closed its doors. 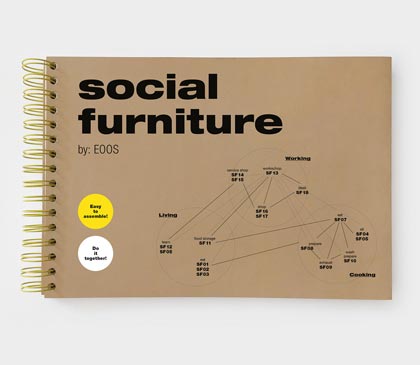 The Social Furniture collection - an illustrated catalogue complete with instructions on building a total of 18 items of furniture for the living, working and cooking sectors. Available from the publishers: Koenig Books Ltd., 2016

Austria's project was geared firstly toward designing spaces where needy persons could live a decent life, secondly toward establishing a reality check for architecture's responsibility for social issues, and thirdly toward bringing the results to the attention of the public at large in Venice.

Jointly with his partner Inna Shevchenko, Iran-born director and producer Arash T. Riahi has documented life in two of the Places for People where refugees already live.

Cookies and third-party applications are used on our website. This helps us to guarantee the best possible performance of our website, especially the constant improvement of the functionality of our website (analysis of the user visit).

Do you consent to the use of cookies and the processing of personal data associated therewith?